Firms can make use of the 4Rs Cycle to plan and execute their COVID-19 business recovery. As uncertainty continues, cycle through the steps:

Contact me (dean@latchana.co.uk) to learn how to organise and adapt your business recovery plan.

In this talk, I propose an organisational resilience mindset can enable enterprises to strengthen their resilience to unforeseen circumstances.

I will explain how organisational resilience can enable organisations to survive, thrive and create opportunities through crisis and change. The talk covers:

This series of articles examines how organisations can create opportunity following a crisis. I will argue that as the world becomes more complex and undiscernable, how organisations prepare and deal with inevitable failure can give them a competitive advantage. So much so that intentional failure can provide more upside than the downside.

Many readers will be from the fields of Agile and Lean. Following on from my introduction to this series, this article will consider the maturity of these ways of working, but then put them to one-side until the end of this article series.

Why put them to one-side, especially considering I’m an Agile Coach? Well, to be frank, their current application is becoming commoditised. Their essence and original intent are being over-shadowed by large consultancies, large-scale change initiatives, sheep-dip training programmes and certification one-upmanship. Such organisations and initiatives often pay little more than lip-service to Agile’s and Lean’s simple yet powerful approach.

Using Geoffrey Moore’s Adoption Curve, there’s a lot to suggest Agile application is travelling across Early Majority. My opinion isn’t unique; Dave Snowden and many in the agile community recognise this trend.

If we consider ourselves as change-agents, co-developing new emerging ways of working to help our clients and colleagues, we need to look beyond Agile and Lean – particularly in its current commodified application. This is my intent for this series of articles.

Another reason why I shan’t dwell on Agile and Lean is that I believe they have little application during an organisation’s crisis. However, later I will argue they play an important role once a crisis has been stabilised.

There’s a great deal of literature on how Agile and Lean deliver customer value at pace in a complex environment. I’m not going to repeat it here other than to say these approaches are particularly useful when dealing with known problems and opportunities. The challenge is that knowledge and understanding do not exist during shock events and crises that will inevitably engulf an organisation.

Putting Agile and Lean to one-side, in my next article I’ll be returning to organisational resilience. I’ll be telling the story of Nokia, a company that has fallen out of favour yet has an impressive history of resilience.

In business, organisational resilience often relates to ensuring services and operations are maintained, or return to their current state after a period of instability.

However, there is an extension of resilience that organisations can utilise to continuously evolve, find new stable states and rapidly seek novel opportunities.

These benefits can result from intended low exposure to instability that would otherwise be too brand damaging in high degrees.

Examples of types of organisational resilience

Whether instability is intentional or a result of external factors, organisations should be structured to rapidly respond, and capitalise on new understanding 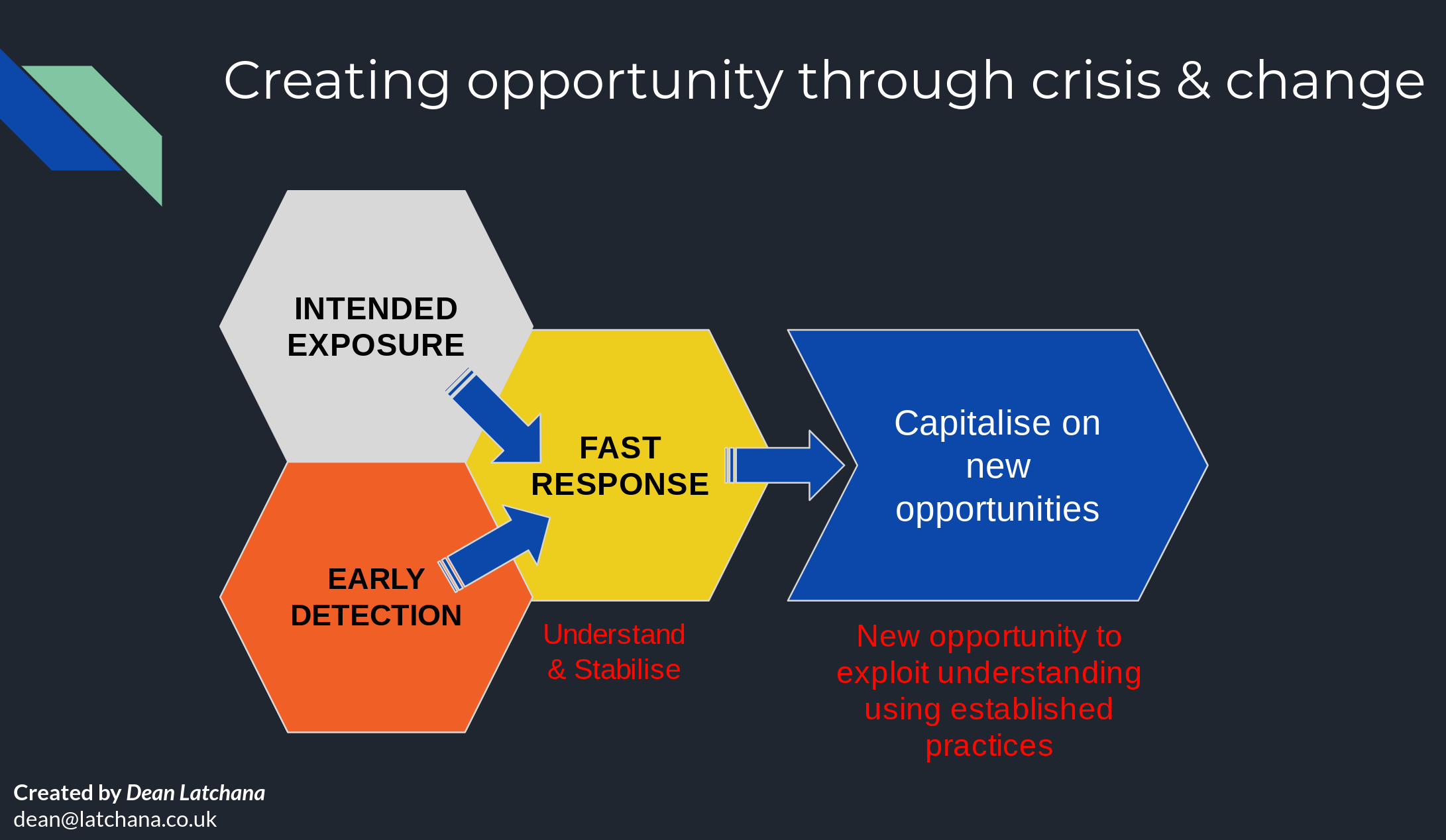 Walmart: How Wal-Mart used Hurricane Katrina to repair its image

Resilient Organizations: How to Survive, Thrive and Create Opportunities Through Crisis and Change – Erica Seville (2016)

My mini-series of articles on organisational resilience (2018)

I’m available to deliver a talk on Agile and Organisational Resilience.

Contact Dean Latchana to learn more about how organisations can benefit from intentional disruption and crises.
(dean@latchana.co.uk)

This series of articles examines how organisations can create opportunity following a crisis and unforeseen change. I will argue that as the world becomes more complex and undiscernable, how organisations prepare and deal with inevitable failure can give them a competitive advantage. So much so that intentional failure can provide more upside than the downside.

In the last article, I explained how, by creating a wide portfolio of business interests, Nokia has remained adaptive to unforeseen change. Having a wide variation allows the organisation to weather the unforeseeable downturn in one area by offsetting it against the unforeseeable rise in another. This ensures survivability and selection.

This article is a case study of how Nokia and Ericsson handled an unforeseen incident differently resulting in the ongoing success of Nokia and the loss of market share for Ericsson.

At the start of the century, Nokia and Ericsson were two dominant mobile phone manufacturers. Both firms were using microchips manufactured by Philips. In the year 2000, a fire in Philips New Mexico factory caused damage to the plant resulting in a halt to the chip supply.

On the other hand, Ericsson believed Philips assessment that production would be restored within the week. It actually took six weeks. The extended delay caused Ericsson to suffer a critical shortage of chips during a time when handsets were in huge demand. Sales dropped, unused inventory piled up, and their market share declined.

The fire, which took Philips 10 minutes to extinguish, cost Ericsson $200 million in losses in Q2. In contrast, Nokia reported a Q3 profit rise of 42 percent. Ericsson never quite recovered, resulting in Nokia dominating the market for many more years.

Conclusion and the next article

Nokia recognised the fire created vulnerability to its operations and to its market share. It detected the problem early and responded quickly by finding workarounds with their supplier. Ericsson was blind to the threat and lethargic in response.

This capability to detect problems early, and the ability to respond rapidly, enable organisations to be adaptive to unforeseen change and proactively handle crises. To such an extent that they can capitalise on such disruptions to gain an advantage, just like Nokia’s ability to gain market share over its close competitor as a consequence of an unforeseen disruption to their supply chain. 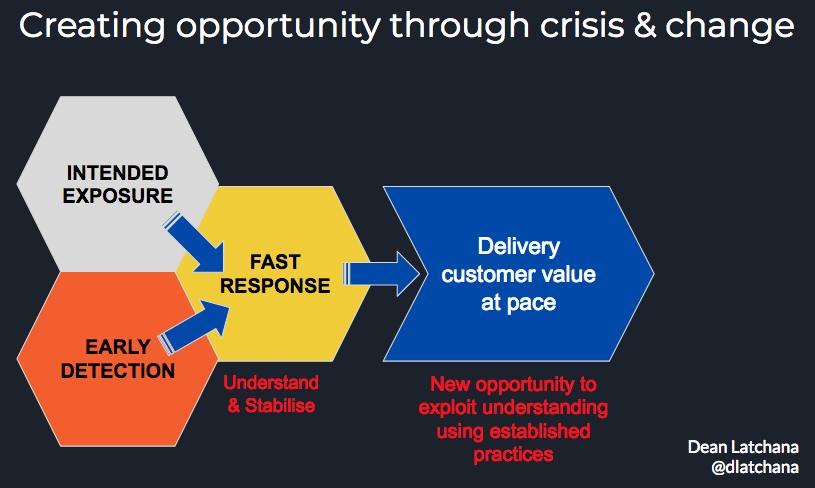 This capability is a demonstration of organisational resilience. It’s a strategic asset that will make or break an organisation.

The concept of resilience is what I’ll be introducing in the next article.

You can read more about the Nokia-Ericsson case in Erica Seville’s excellent book Resilient Organizations.

The Economist has written a special report on the incident: When the chain breaks.

I'm also the editor of The Agilist newsletter, a nonprofit monthly publication for the agile and lean community.

Learn more about me, view my CV, checkout my LinkedIn profile, and learn about my areas of experience

dean@latchana.co.uk is my email address.

Dean's mission is to support organisations to succeed in a dynamic market by developing perspectives and ways of working that are contextual to their needs.

I advise and guide organisations to gain a new set of competencies so they can continuously re-optimise to an ever-changing business landscape.

A catalog of my most recent talks and workshops

You can find out more about which cookies we are using or switch them off in settings.

This website uses cookies so that we can provide you with the best user experience possible. Cookie information is stored in your browser and performs functions such as recognising you when you return to our website and helping our team to understand which sections of the website you find most interesting and useful.

Strictly Necessary Cookie should be enabled at all times so that we can save your preferences for cookie settings.

If you disable this cookie, we will not be able to save your preferences. This means that every time you visit this website you will need to enable or disable cookies again.